I can hold it though 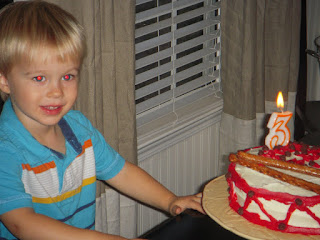 My nephew is a master manipulator, the combination of his adorableness and his tiny three year old voice can convince you to do anything. When he started eating real food we instantly bonded over love of anything sweet and I started bringing him little goodies every time i’d see him. Every time he would see me he would smile that little kid smile that makes you melt and say “aunt tindy can I have some mm’s”. I always gave in, after all when he got fussy I could just send him back to his mom. One day he was at my parents house in my old room and he looked at my mom and said “Birdie, (my moms grandmother name) Aunt Tindy loves candy” she laughed and said “yes she does boo” to which he replied, “I love tindy”. They soon figured out that the copious amounts of sugar I was giving him made him rather moody and told me I had to shut the candy factory down. So I did my best to cut back on the sweet shop and he figured out while Isaac tried to figure out how to trick us into giving in. He would see me reaching for some cake and look at me and say, “whats that”, as if he didn’t know. I would say, “its cake buddy” and he would look up at me like he had never seen it before and say, “i can have a little piece”, as if I had asked. He also started telling his dad that things were good for him, like brownies, cookies, and ice cream. Perhaps one of the funniest things he started doing was when he would see something he really wanted he would come up and grab my hand and say. “tindy I show you” then bring me to whatever he wanted and when I would say no he would say. “I can hold it though”. Every time there was a desert he couldn’t have until after dinner he’d say. “I can hold it though”. He would walk around my parents house with his pockets stuffed full of lollipops and fruit snacks waiting until we would say ok. Any candy he saw he wanted to hold it, staring at it with his big blue eyes. Occasionally we would find him in the corner lollipop in his mouth and a guilty look on his face like it had just been too much to bear. It was hard to be mad at the little guy when I sympathized so much. He thought he could handle the temptation but in the end it won.

Sometimes I feel like kids are humans in their purest forms, before they figure out the politics of life. They are ruled by their wants and their needs and could care less what the rest of the world thinks. Not much has changed though I am still clinging to my life and my temptations telling God, “I can hold it though”. He knows I cant, he knows its to much to bear. He knows that my flesh will give in and I will end up ashamed in the corner, lollipop crusted on the corner of my mouth. We tend to think that nothing is bigger than us, that we can hold onto it all and let God pick up the spare pieces. He can get what I can’t hold, we tell our selves, if there is anything left. So we cling to our lives, our future, our friendships, our spouse, our finances, whatever it is. We think we know how to hold the things we have been given. All the while God is trying to help us but we keep saying, “I can hold it though”. I can handle whatever this world throws at me until we break down. We think no one is looking, we sneak a taste, a touch, a listen and are caught guilty.
I am only looking out for Isaacs best when I tell him no, it hurts me more than it hurts him. I would give him the world if I could but sometimes that starts with no. I think God feels much of the same when he has to say no, no to a job, a love, or whatever else. He knows though that if we will just wait he will give us something better, bigger, and fulfilling.