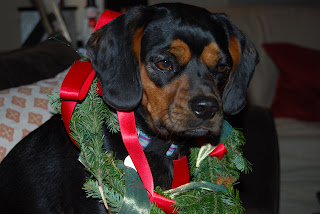 When I was 20 I convinced my parents that I needed a puppy for “medical reasons”, they release endorphins, and after a year of promises that he would not end up living with them (which he did) I got one. When I took him home he was a tiny black puff ball that cried constantly for its mother and insisted that he slept curled around my neck. He weighed about five pounds and the breeder assured me that he took more after his cavalier father than his beagle mother and that he wouldn’t weigh more than eighteen pounds.

Today he weighs almost thirty pounds and the only resemblance he holds to a Cavalier is his coloring. I didn’t know much about beagles when I first got Aiden but later found out that they are strongly stubborn, they love to bark, and if they smell a squirrel in a five mile radius they will chase it.
When Aiden was a puppy I quickly lost my patience at his all night whining and he ended up sleeping in bed with me under the covers curled up at my feet. When I would leave for class he would stand at my door and bark until my roommates were either forced to let him into their bed or wake up and when I would come home from class I would find my room in shambles and Aiden at the top of the pile. I quickly learned he was part goat when he found a giant unopened bag of reeces cups in my room and ate them all including the wrappers. I came home from class to find the empty bag and Aiden fat and happy asleep on my bed. I called my vet in a panic who told me I just had to wait it out. Somehow amidst all of his destroying, eating, and peeing we bonded and I learned to laugh and hide all my candy. Each day home meant a new disaster and it always was the same, I walked in to destroyed plastic and candy wrappers strewn about and Aiden looked up at me and wagged his tale while he cowered on the coach and each day I yelled at him popped him on the nose and promised myself i’d hide them better next time. He never seemed to learn though, each day was a different version of the same and no matter how mad I got at him bedtime always meant he crawled under the cover and curled up at my feet. Almost a year into having Aiden I learned to stop phoning the vet when he would eat a bag of chocolate and to just punish him and move on. During his six month stay at my parents house my dad coined the phrase “mini Marley” because the movie hit a little too close to their home. He is mischievous but undeniably lovable, I’d find him with his butt sticking out from under our fence and just have to laugh because at the end of the day my love for him was greater than my need to punish his destructive habits.
One of the greatest things he does is give you “hugs” when you come home, he places one paw on each shoulder and presses his furry neck into your face while his little tale does circles. Ben often comments that Aiden seems much more excited when he gets home from work than I do. When we got married I was convinced I would not let Aiden sleep in bed with us but halfway through the night I would find him in between Ben and I with his head on my pillow. Six months in I have given up trying to make him stay on the floor. Tonight we came home and found our supply of gum and candy had been dug out of a cracked drawer and been strewn across the living room with the really good pieces missing. I popped him on the nose as he cowered in the corner trying to fake regret. I have already given in though and as I type he is nuzzled underneath my pillow in a ball (he has become adamant about his sleep in his old age).
People always say that dogs resemble their owners and as I think about Aiden I can’t help but realize for us its slightly true. If my personality was compared to a dog breed I would sadly say that I would be a beagle if for nothing else than their stubbornness. Aiden can learn the same lesson a hundred times yet he repeats the same sin again and again. It doesn’t matter how many times I pop him on the nose he does what he wants. I realized in this that God treats me a lot like I treat Aiden, popping me on the nose and then letting me go on giving him lavished hugs because he cares about me much like I care about Aiden with logic that can’t be explained. Aiden has destroyed my house and my trust and yet he continues to sleep in the bed because I know that my love for him outweighs his sin. I haven’t experienced parenthood but I imagine its much the same, sin that is followed by unconditional love. Whenever we tell stories about Aiden to our friends and his ability to get food anywhere in the house (including on top of counters) they always ask why we don’t just give him away. I always say that if you just let him hug you then you’d understand because his wagging tail is worth far more than the thirty minutes it takes me to clean up candy wrappers. I imagine God feels somewhat the same, coming behind us cleaning up the candy wrappers in our life all the while telling us its in our best interest to obey.