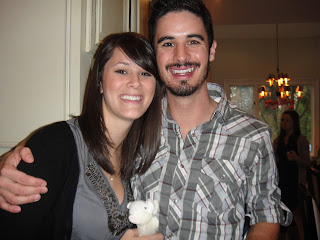 I have always thought that to succeed you really just need one person believing in you. When you are young it is crucial to have someone in your life speak truth to who you are. When I was sixteen I was consumed with myself and what I could get. I wasn’t adding much to the world except a few F bombs and a large amount of Abercrombie perfume to the already soaked halls of my high school. My point is no one had any reason to believe I would amount to anything. I drank like a fish, talked like a sailor, and wore enough blue eyeshadow to paint a wall. I was a pretty typical a teenager but despite my bad habits and inability to wear makeup my family always believed in me. There wasn’t much to believe in but they always said one day I would come out of this.

My oldest brother and his now wife had the greatest impact on me. I will never forget after another episode of being caught for drinking my brother sat me down and told me, “God is going to use you for great things one day Tindell.” I almost fell out of my chair in laughter. It stayed with me though. His wife would tell me the same thing. Every time I got caught for something I shouldn’t have been doing they would tell me, “God made you for so much better, one day you are going to be used.”

The result, here I sit almost ten years down the road believing that God will used my scarred past for his kingdom. I have written a book and am pursing publishing because years ago my brother, parents, and sister in law told me that God can used even the greatest of sinners. My point is when you are younger or even older, it just takes one person pouring into you to make a difference. Who is God calling you to believe in? Maybe its the slightly awkward kid at youth group, or the rebel in the corner, or maybe you need someone to believe in you. Whatever it is we were made to build each other up and doing so shows the great love of Christ because after all he is your biggest fan.